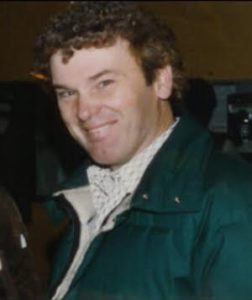 Gene was a husband, father, coach, counselor, teacher, sportsman, carpenter, promoter, salesman, and all around fun loving person.  Many of us are good at some of those things, few are excellent at all, he was.  Gene devoted most of his life to coaching and running hockey tournaments for kids.  He did this out of love, love for the kids, and love for the game.  He will long be remembered by those he coached, parents whose children he coached, and anyone who had the opportunity to meet him.  Gene Harrington was a most unforgettable person.  Anyone who knew him could write a book trying to describe him.  Perhaps you can best picture him through his own words.  The following is a speech he wrote.  This speech reflects a coaching philosophy that permeated his life.

I have met many coaches in the last twenty years, some great, some fair, and some poor.  Sad to say the poor ones far outnumber the fair and great ones.  I have found the main reasons most adults coach is they do not trust anyone else with their kids and their own ego.  Unfortunately, we are in a time when winning is more important than competing, and there is a ever present specter of coaches seeing their players and fathers seeing their sons, as extensions of their own egos.

Vince Lombardi’s most quoted expression, “winning isn’t everything, it is the only thing.” What most coaches and parents forget is Vince worked with professionals.  What is generally unknown, he was a tremendous teacher, great motivator, and organizer. He was an inspirational leader and always showed concern for the welfare of his players on and off the field.  If I had to compare him to a hockey personality it would be Bobby Clark.

I had twenty great years of coaching and hope to have twenty more.  In that time, I have seen many players I coached grow from boys into men and know that I have had a part in that growth.  Adults who demand victory, take away the most important ingredient of all, the sheer love of the game.  Demanding victory is the main cause of hockey burn-out in kids today.  If used properly, hockey is a great tool to help shape a boy’s future.  If I can leave you with one point, remember your team may lose, but you as a coach never lose.

Hockey has given me great enjoyment in life, which I have tried to give back to the players as a coach.  My advice for those coaching kids today:

I have said many times over the last twenty years, “you can never make a great player out of boy who is not potentially great.  But you can make him a great competitor, and miraculously, you can make a man out of a boy.”